I use endomondo now and again – it is like a Facebook for exercise – mainly to keep abreast of what friends are doing.

They also have challenges that they invite people to take part in … one of these is a calorie count and others allow you to chase goals – i.e. by running 50km or 100km a month.

It is motivating and i am currently doing the 50km challenge although very close to 100km (at which point I get chucked out) …. but nice to see myself at no 1 for a change.

For some time now, I have experienced a nagging feeling that a ‘solo’ bicycle is not enough.  Blame the constant, ‘more, more, more’ attitude that seems to pervade society; it seems that these days everything has to be bigger, better, faster than before, and that anything you already possess must by its very definition be inadequate.  But, on closer consideration, I think that my discontent has a more practical cause.

Having cycled since I was a slip of a lad, I have encouraged my daughter to do the same and at nine she is now a pretty competent cyclist.  Now clearly, it would be somewhat unfair of me to expect her to accompany me on her child’s mountainbike as I notch up 60 or 70 miles around the rolling East Anglian countryside, and not wishing to put her off for life, I concur.  But it has struck me that there…

looks like an interesting book for those that run or are even just thinking about it …..

There are some books you pick up and you just know the story is going to be about you. You may know the author so well you feel he or she is a kindred spirit. You may have read the book a hundred times. You may love the topic of the book so much that there’s no room in your heart for anything but acceptance and understanding. I have encountered a number of books like this over the years – these are books that don’t change your life so much as reinforce that the path you’re on is the right one. For me, Bingham’s memoir on becoming an “adult-onset athlete” is one of those books.

I’ve been enjoying his articles in Runner’s World since I started running myself in October 2010, and when I saw that he had a book out, I put it on my Christmas list along with

A new book is out that has just shot onto my buy list ….. 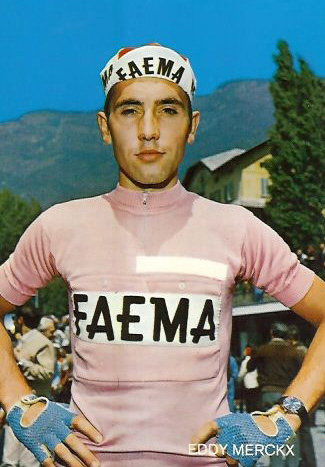 Merckx, it is claimed, suffered from non-obstructive hypertrophic cardiomyopathy, a condition closely related to that which appears to have caused Fabrice Muamba to collapse playing for Bolton Wanderers against Tottenham Hotspur in the FA Cup on Saturday.

Daniel Friebe in Eddy Merckx: the Cannibal recounts an incident during the 1968 Giro d’Italia when Enrico Peracino, team doctor at Merckx’s Faema squad, invited Italy’s leading cardiologist professor Giancarlo Lavezzaro to test the Belgian and another top rider Vittorio Adorni using a then state-of-the-art cardiogram at a sponsors dinner following stage three of the race.

Lavezzaro was shocked to notice that according to the results one of the riders – Merckx – was right in the middle of a heart attack although outwardly the rider appeared to be OK, though noticeably fatigued following a tough stage. Lavezzaro asked Merckx to repeat the test first thing the next morning. The result again appeared to confirm a clear case of non-obstructive hypertrophic cardiomyopathy.

Merckx’s team and Lavezzaro faced a dilemma. Did they tell Merckx – who to all intents and purposes appeared to be a superfit and healthy 24 year-old, about his condition, or even pull him from the race?

In the book Lavezzaro remembers Merckx “making vague noises about his cardiograms always being funny” but also recalls the Belgian insisting that he would race on whatever the diagnosis. Lavezzaro returned to his home in Turin and fully expected to hear news every day over the next fortnight of a Merckx collapse during race.

In fact the Belgian proceeded to his first grand tour triumph, the first of his five Giro titles, before going on to win five Tours de France. He was also three times the victor in the Vuelta a España, won three world championships and on 19 occasions claimed victory in one of cyclings’s five ‘monuments’ – the one-day classics Milan-San Remo, Tour of Flanders, Paris-Roubaix, Liège-Bastogne-Liège and the Tour of Lombardy.

“Now,” says Lavezzaro emphatically in the book, “Merckx wouldn’t be allowed to race. At the time we could see that he had a problem but couldn’t make a precise diagnosis without doing a cardiac catheterisation, which obviously wasn’t practical at the Giro. We just knew that he was at risk.

“Later I wrote to Merckx’s doctors in Belgium but they said it couldn’t be anything because he was still winning on the bike. The next year, the brother of the president of Torino football club had exactly the same thing and we went to Houston in the US to get it diagnosed properly, because we didn’t have the right apparatus in Turin.

“It was a non-obstructive hypertrophic cardiomyopathy. Nowadays, you pick it up straight away in the electrocardiograms that, for instance, professional cyclists have to pass to get their licence. And someone with that diagnosis wouldn’t be allowed to race. There are no symptoms … but there is a risk of sudden death.

“In 1977, an Italian footballer called Renato Curi with this problem dropped dead in the middle of a match … But no, there were no aerobic advantages and nothing Merckx could feel. There was just this sword of Damocles above his head every time he raced.”

Hum of the city

Shirley takes her girls (1st and 2nd grade) to school every day on the deck of the Big Dummy. On weekends, her husband B.D. rides the bike and she rides on the deck, with the girls riding alongside on their own bikes. She says she gets some great videos this way, and it is an awesome sight to see them riding en masse. The ride to school with the kids on deck is mostly downhill, but she’s got to get them back home again, and they live on Lone Mountain. There is…