new middleburn crank and bottom bracket to replace the worn 2007 XTR and the ill fitting bottom bracket. The bike shop rang to say the bottom bracket is a thing of beauty – shame it is hidden away inside then. 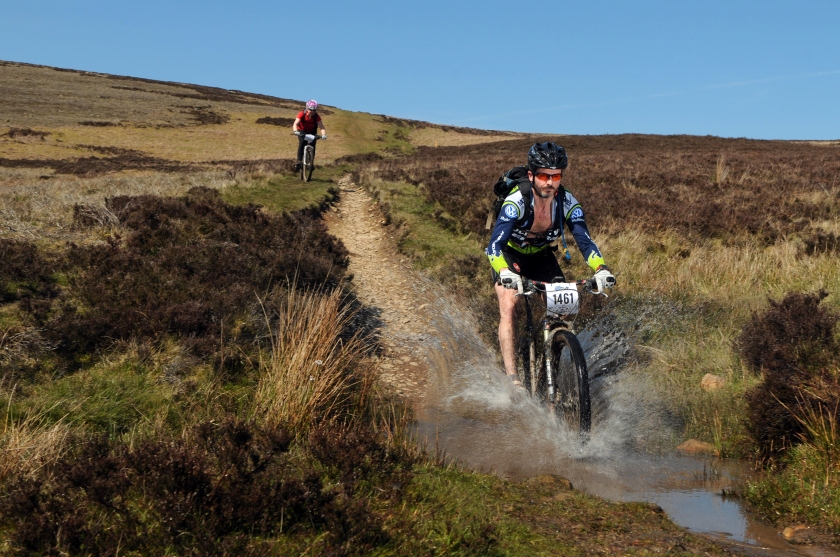 Went down on the Saturday afternoon and saw a lot of cars with road bikes heading in the opposite direction after the sportive. Event camping was  in Selkirk. After weeks of rain the weather forecast was true and good and after a cold clear night where the temp in the car got down to 1 degree C – the blue skies and May sun woke the riders up and set the tone of the rest of the day.

After the ride got off at ten o’clock with the Championship riders leading the field out it only took a little more than three and a quarter hours till the leading championship riders came back into the event village.

Highlights of the race were the scenery in general and the sections of trail centre singletrack at Innerleithen, part of the renowned 7Stanes network. This part of the Scottish Borders is stunning, with rolling hills as far as the eye can see, gorse in full golden flower, and a superbly remote feeling. I do however have a gripe – being mid field some of the technical single track sections were really bogged down up to 20cm of mud and quite unrideable. Hate to think what the riders 300places back would have thought.

Feel that they could have had multi sections were another option was opened after the first 250 riders passed through … a minor gripe and just that i would have loved to ride it all instead of having to walk 3 sections.

there was also a section where the 70km (actually 60km if I had another moan) came back to join the 45km lot and there was a hill that i didn’t see anyone ride – up to 22% according to the Garmin … again think the organisers should have picked a gentler route this late in the ride as it is the people on the 45km course that they really should encourage to come back and a 600m walk will not help them do that … Then a lovely descent – most people like me just riding down the side of the heather … a few of the full course 85km guys came flying past as well … then the water pic above – need to buy the Hires version for vanity reasons ….
Lastly the finish and another t-shirt which i said No to. The race must appeal to people that care about the environment and then they give out cheap horrible t-shirts that no-one with any fashion sense would wear out … they should copy the marathon and run events and give out small medals instead …
Must say that the greatest post finish bit was the routine …
1. WASH THE BIKE

Selkirk MTB marathon on Sunday – Anyone else doing it and still deciding whether to enter the long or medium ride. (reminder to oneself check weather then decide)

So last nights 5 a side game was my last exercise …. taper down now so that I am super fresh for Sunday …..

The next round will take us to the other spiritual home of the MTB-Marathon Series – Selkirk in the Scottish borders. But this time the Scottish round is not just earlier in the year but it will also feature the UK Marathon Championships.

You can enter Selkirk HERE 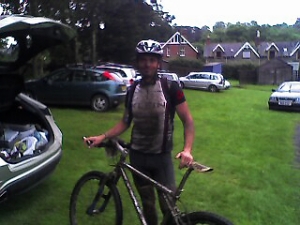 Just back from 6 weeks work in the Middle East and with the Xizang sitting at home in the cupboard I thought it was time to put it through it’s paces.

Had entered the Selkirk 100 (well actually 75km) and although training was virtually non existent – unless of course sitting on a gym bike counts as real training – I was up for it. I had ordered some UST tubeless tyres for the race and a new Rock Shox SID team 2007 fork …. tyre sent was the wrong one and the Fork was at my friend’s house. A little moan as he was supposed to race but had decided to bail out and had gone to see girlfriend in Birmingham leaving my fork locked in his flat. Oh crap.

Still went along ready for the 19 degree C and sunny weather that the forecast had predicted … instead rain and mud. So tyre choice crap Kenda Karma2.0 (nice tyre in any not wet conditions pretty fast rolling and good grip) back (tubed) and UST Schwalbe Skinny Jimmy 1.9 on the front. Forks still 10 year old SIDs which may have blown seal as they barely compress. Wearing in the Rohloff Speedhub hasn’t even started – it is supposed to take 1000 miles – so a race is not the most sensible way to start. During the race the gear changes on the Rohloffseemed to get stiffer and stiffer – thought at first it was sore wrists after all the falls but something definitely wrong. Only twigged a few days later that the cut off bar grip had slipped and was so tight against the twist shift that the friction was making changes difficult. Now aware of it it is easy to avoid

So blame the equipment but it was me at fault … not fit enough and due to weather / practice / equipment I must have fallen off or gone over the bars at least 12 times in the race.

The bars on my saddle are bent now –

too many crashes or just shoddy construction. After 5h 42m with a terrible ave speed I came in 64th.

Retirement even before I felt competitive.

Still a few changes since then. Put on a 90cm stem and the new Sid forks and the bike is feeling great again….

who knows I might actually get some miles in soon.