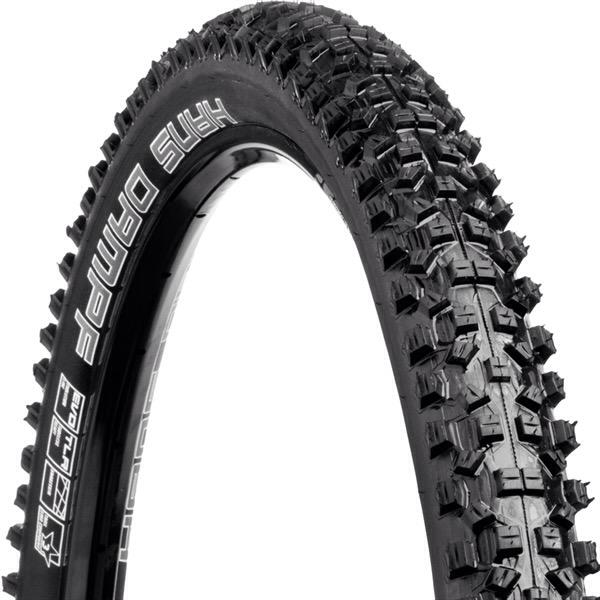 It has been a while since I reviewed anything so thought I would share my thoughts on something that just seems to work. I am not very swap and try when it comes to equipment I just like good stuff that works well, it might not have the very best of the best quality but has to do what it does well. Take my brake spec on my mtb – I asked Carl at the shop what brakes to get – he was steering me towards hope when I mentioned these should be fit and forget type brakes. Hence the same XTR brakes on my bike for 6 years and apart from 1 bleed and 3 different sets of pads nothing has been fiddled with.

But tyres have had their issues. I was on the misconceived idea that I was sort of racer having tried 3 sets of racing Ralph’s over the years. But grip was pretty sketchy in scotland doing typical riding and sidewall was a painfully thin learning curve having ripped two sidewalls open riding flinty tracks a half hour for the house.

I moved onto maxxis ardent tyres and I liked them a lot more. It was only an issue with a bad thorn and dried up sealant after 2 years of no maintenance that made me think I should take more care. I refilled the sealant and pumped the tyre up hard (60psi) to seal the edges. Max recommendation is 45psi for the tyre width and rim but seriously – I had tea to make and drink when BANG the tyre had popped off the bead was stretched and sealant was on the wall.

So I started shopping for a new front tyre and I decided to go wider and bought a trail star hans dampf 29×2.35

On the trail the HD is a step up from the ardent – incredible feedback from the front and stays planted on the trail. When railing through berms the slightly worn ardent on the back would start washing out before the front. As for trail speed I didn’t notice a huge drag factor and let’s face it the weakest link in a race setup would be still be me. 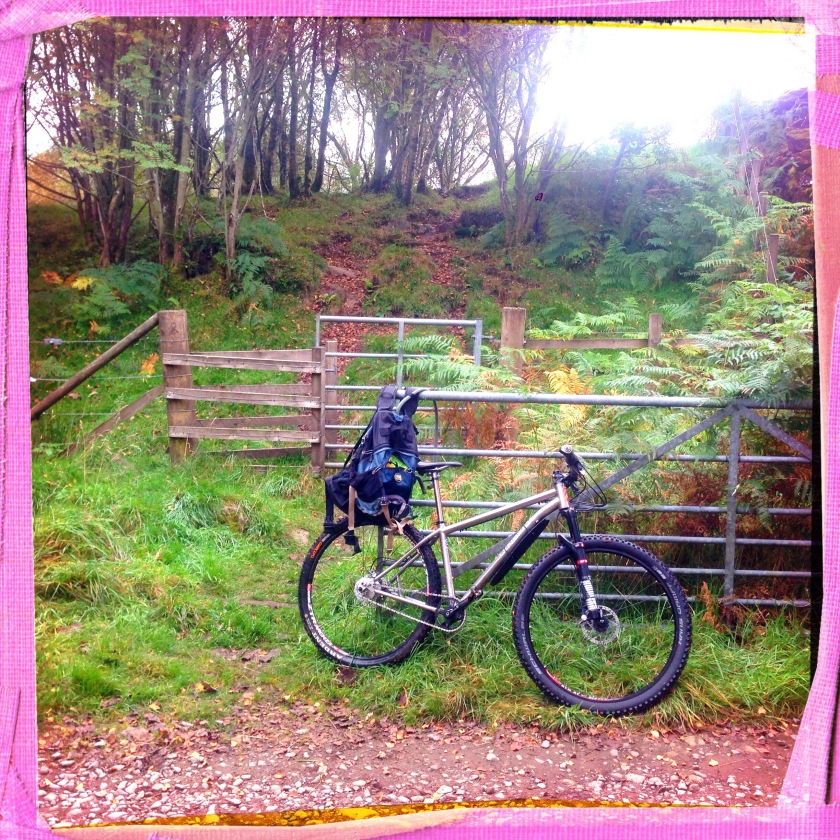 Was thinking about replacing the worn ardent on the rear in a while and whilst a HD is tempting I have read that it rips easier there and most people seem to suggest a nobby Nick is a good match. More on that later. 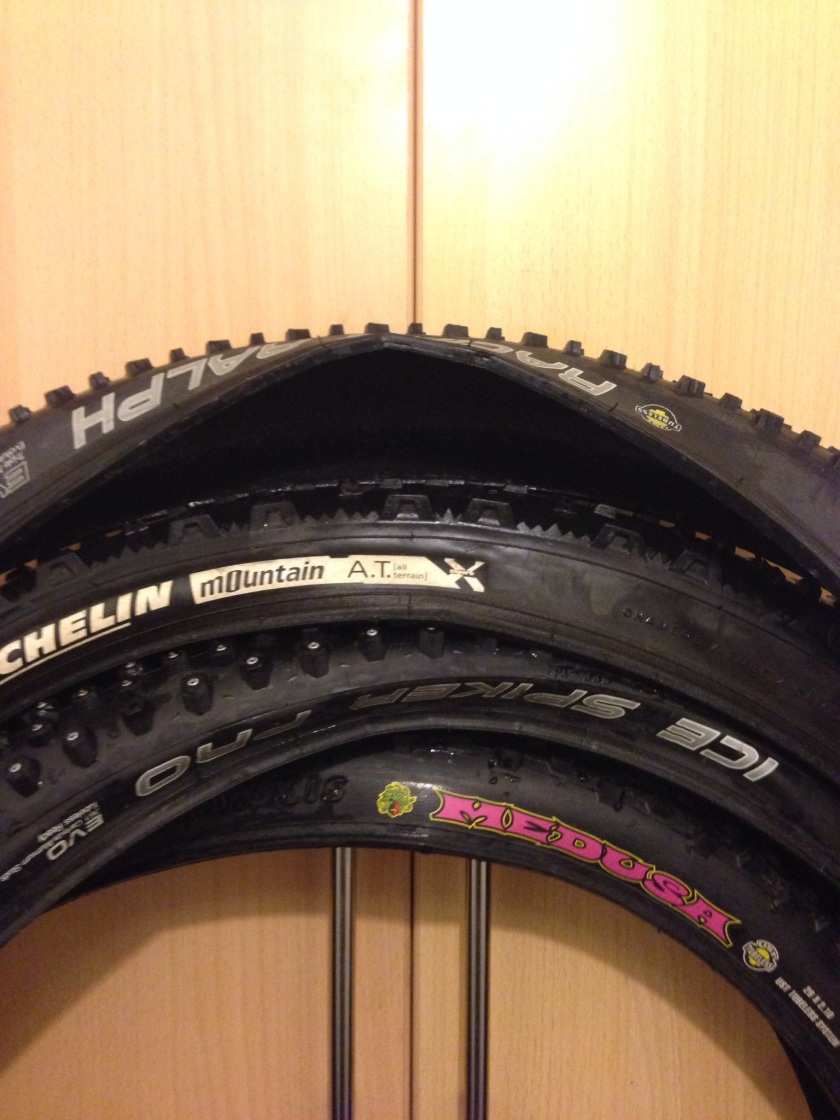 Schwalbe Ice Spiker PRO 26×2.1 Tubeless Ready (only used to race Strathpuffer 24 in Jan 2013 – some spikes missing but other than that nearly no wear … replacement spikes available) £25

maxxis Medusa 26×2.1 Tubeless (I think this is even quicker than racing ralph and better grip in marginal conditions). £15

or £50 all in incl postage to save my faffing 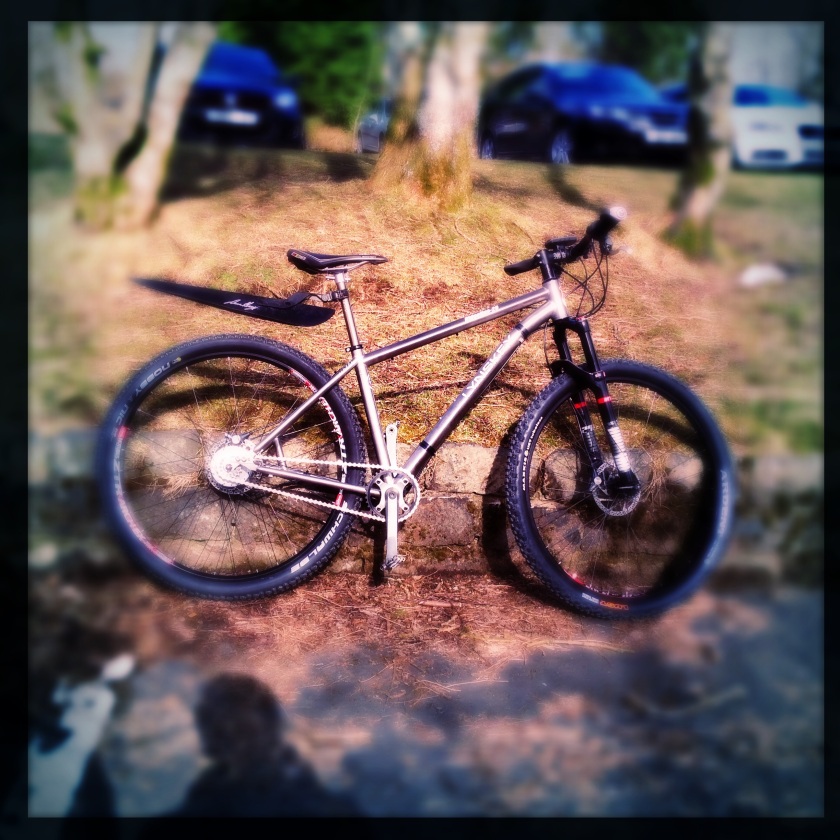 First ride today – just after this picture was taken more snow fell – but it feels fantastic. Back at shop now to slam down the stack height and to fit a tubeless rim strip to the rear. Then I will go for a mission on normal trails to compare with the older bike 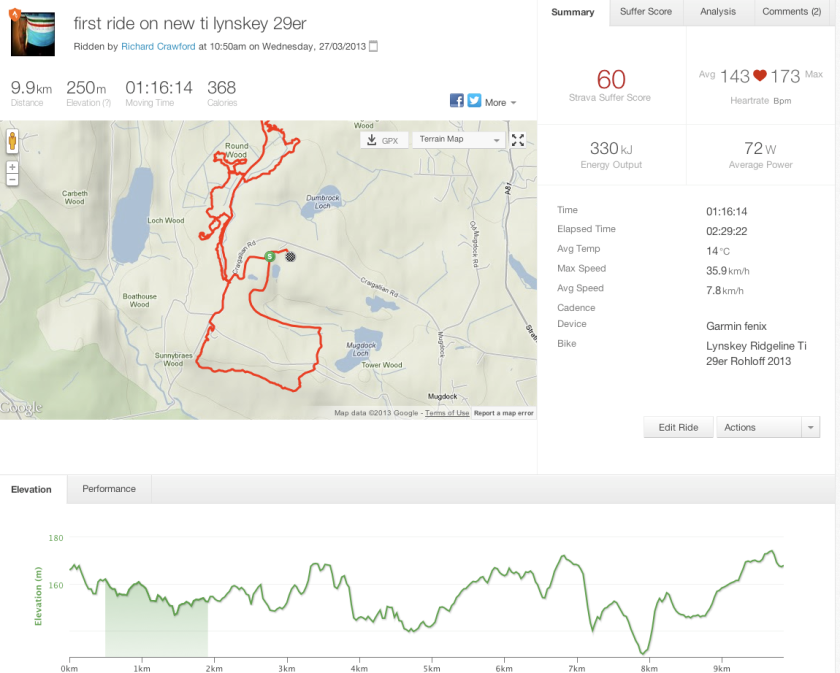 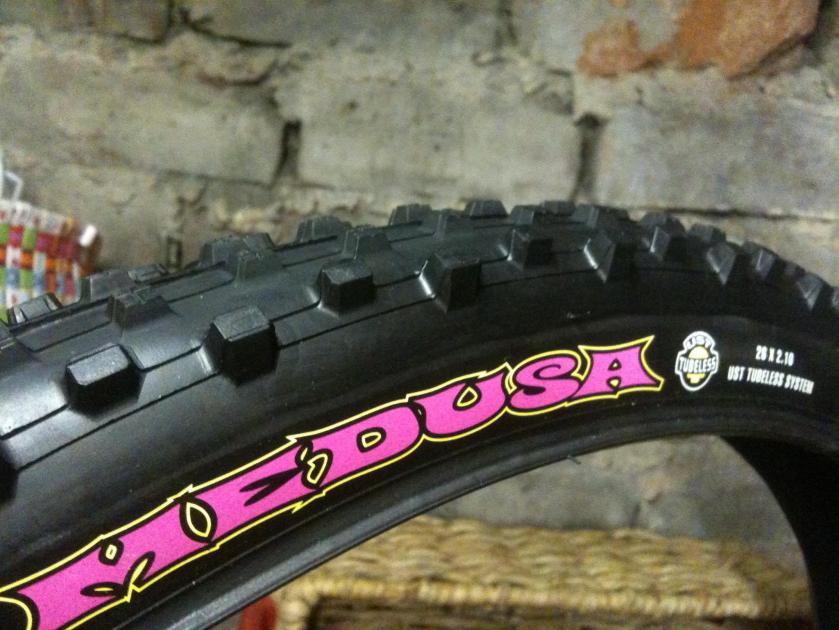 After last weekends antics I have a quick review on this tyre. I am running a 26 tubeless version on my rohloff titanium mtb. I can only compare it to racing Ralph’s, Larsen TT tyres and specialised the captain.
This tyre is fantastic – I had read it was good for shedding mud but it does more than that – I have not had a slip or twinge from it these past 100km. It held its line on off camber wet rock – gripped through goopy mud and doesn’t seem that slow rolling along fireroads.

Also it holds air well on a UST rim and a wee touch of pink writing is fine by me too. Hopefully get out again the next day or so.

Moving house and storage is going down so we are selling bikes – 3 0f them at least.

First Up The Klein 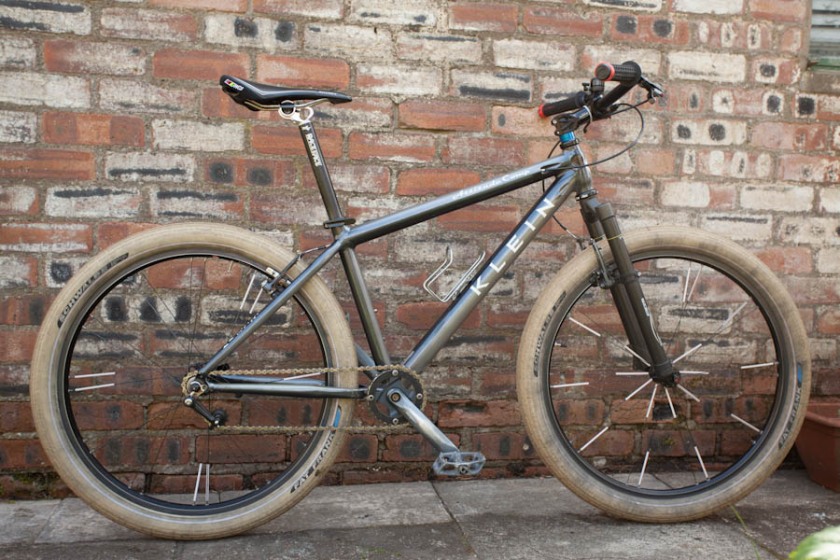 There are two wheel sets with the bike – A rolf Propel lightweight race set shed with bling Schwalbe Fat Franks. Gearing is 32:14 on this set. 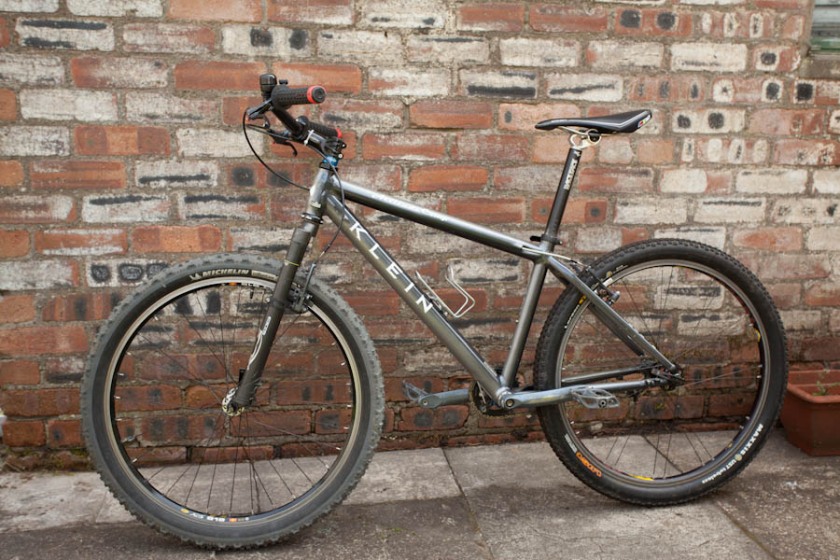 offroad wheel set is a mix (rolf Propel UST at rear with 32:16 setup) this is shod in a Larsen TT UST tyre

Front is a Michelin XC – slightly chunkier front tyre for both a bit of shock and really great grip. Hub is Hope Pro3 and the rim is a MAVIC 819 tubeless.

Pace RC31 rigid forks are some of the lightest fromt MTB forks around.

Broken apart everything will fetch 800ish and more on flea bay (where it is heading next) but would prefer to sell as whole …. SOLD SOLD SOLD sniff …. 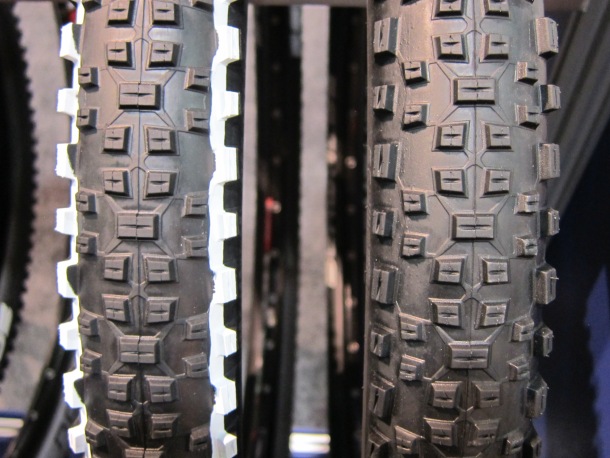 The Racing Ralph gets a new tread pattern this year along, and will utilize the cross-country PaceStar Compound. The new profile has rearranged the knobs, and should give a more consistent feel (* for me this is important of sliding on my arse with the slightest amount of mud on the tyre – grip goes instantly with no warning), with better transitioning and traction. 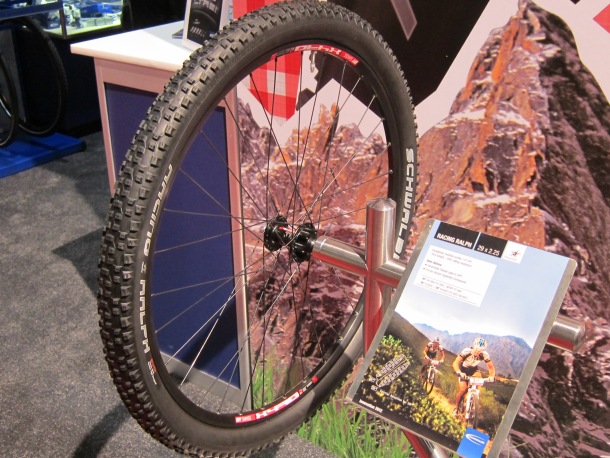 The 29er profile was also tweaked, and is more spread out then the 26er, to take advantage of the big wheels larger contact area. They did a major overhaul on the casing, changing it from 67tpi to 127tpi, giving it a more supple feel, and losing 30 grams and decreasing the rolling resistance by 20 percent. The new tires are certainly light, coming in at 455 grams for the 26×2.1, 495 grams for the 26×2.25, 495 grams for the 29×2.1, and 535 grams for the 29×2.25 size. The tires are all tubeless ready (except for the Performance series), and come in a slew of version and sizes, including 26×2.1, 26×2.25, 27 1/2 x 2.25, 29×2.1, 29x 2.25 and a big wide 2.9×2.35. The TL ready tires have some optional sidewall versions, such as SnakeSkin and DoubleDefense, and they even have hand-made tubulars. They also added a 4Cross edition of the Racing Ralph using the new GateStar compound with SnakeSkin sidewalls and come in a 26×2.25 sizing. The GateStar is a combination of the PaceStar for the center section, and the downhill VertStar for the shoulders, giving it great usage for 4Cross, SuperD and Enduro racing.

A confusing mix all with the same name …..  more info here

Here is just part of the dizzying variety on offer. Do you think they need to make the difference clearer? 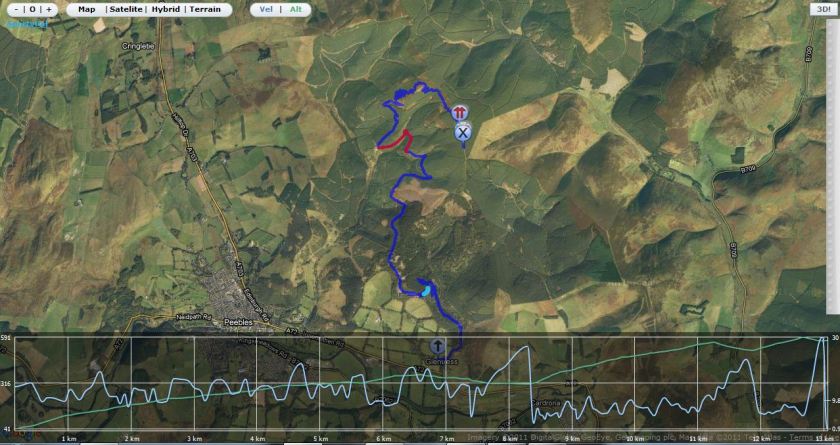 I was filming last week – but schedule was to do so in Peebles and promised an early 4:30pm finish. So a plan was hatched to hit Glentress in the late afternoon for a burn up the hill to the radio mast. I put the Carver Ti Bride (my rohloffed 96er) on the roof of the car.

I had a nagging feeling that I had left something behind as I was driving down the road but had been going through the checklist….

Pumps (air and shock) check … you get the idea … then whilst filming I thought of socks and thought Bingo that’s what I forgot … luckily the very excellent BSpoke bikes was a couple of hundred metres away – and the BikeHub at Glentress is also great although I had a fear that it may have closed early …..

So got to the centre paid my £3 parking then set the Garmin 305 onto the ride I did in a pack and in snow in Jan in an effort to see how much quicker summer is.

The route I took (GPX file is here if you want it) in Jan was followed as I was soon so far ahead I couldnt see the little figure that acts as a pace maker when doing Garmin routes ….

The ride is lovely winding up the red and black routes to the radio mast at the top ….

You go over the little wood tricks on the way up – a great way to get your focus balanced before pointing downhill.

The higher black part of the climb has one or two tricky sections but the idea is to get all the way up without putting your foot down … I did but only for a p*ss break !! (the gpx file for the route up is here)

Got to the radio mast in about 1h10min and then I was ready for a smashing downhill. 200m down the road as I was leaving the Fire Road to get onto first singletrack …. Clank ….. Tsssssss. My new Racing Ralph UST was pissing air. Rolling it on side to get sealant to plug was no use … tried adding high volume air and lay on side for gloop to work and no good.

Thought I would have to bite the bullet and put a tube in as the hole / tear was pretty small when it dawned on me … that earlier nagging feeling. I gave my last inner tube to my friend Findlay when he had a puncture and I wasn’t carrying one.

BUT … it was a beautiful night – the air was still and sun was pure delight … I help up the saddle and proceeded to run down the mountain following the escape route. It was just over 13km up and only a 4.7km run down in stiff carbon soled MTB shoes. Still exercise is exercise.

Shame to miss out on the nice singletrack descent and the swooping bermed loveliness but I could have been working or sat on my arse somewhere. 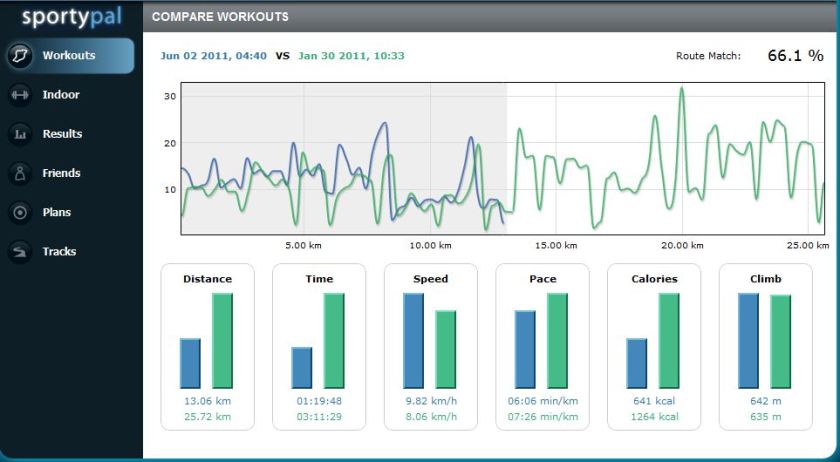 The question at the end is why Schwalbe one of the biggest and some say best tyre manufacturers has such a problem in their UST department? Having one Racing Ralph rip on a normal groomed made MTB course could be construed as unlucky but to have a second one go so quickly is ridiculous. The terrain is not rough – probably smoother than nearly every XC course I have ridden on. So good riddance to the RR and time to get the Maxis Larsen TT on the bike.

Has anyone else had a problem with Racing Ralph’s?